Second Showing – 8PM – A Tribute To The Legends of Blues & Jazz Featuring The Voices of Unity Youth Choir, Directed by Marshall White

Unity Performing Arts Foundation and Parkview Health present: “Let the Good Times Roll: A Tribute to the Legends of Blues and Jazz.” The Voices of Unity Youth Choir will pay tribute to the amazing legends of blues and jazz. This will be a magical experience you do not want to miss. Learn more below!

Countdown to the Concert

Click on the button below or Click Here to purchase tickets for this event. Tickets are processed through Arts United – please see pricing in the price to the right.

The World Champion Voices of Unity Youth Choir (VOUYC) is Unity Performing Arts Foundation’s acclaimed Youth Choral Program. It is our premier soulful choral group comprised of youth ages 7 to 20 from various backgrounds in the Fort Wayne community and beyond. The program’s goal is to equip, educate, and empower youth to excel in the world before them. It prepares them to be successful leaders who will give back to their society and make a difference in their college life, adult life, and in their professional careers.

“Let the Good Times Roll” is a tribute the kings and queens of jazz and blues from B.B King to Louis Armstrong to Bessie Smith! See their biographies and videos below.

Click on the names and tabs below to learn more about each legend!

[intense_tabs direction=”left” trigger=”click” animation=”none” autoplay=”” loop=”” speed=”3000″ active_tab_background_color=”e4192d”][intense_tab title=”Bessie Smith ” active=”” border=”3px solid #e8e8e8″ link_target=”_self” icon_source=”batch” icon_stack_source=”batch” icon_size=”1″ icon_position=”left” icon_spin=””]Referred to as the “Empress of the Blues,” Bessie Smith owned the stage with a grit and confidence the blues had never seen before from a female artist.  Born in April of 1894 in the hills of Chattanooga, Tennessee, Smith began her professional career with the black Theater Owners’ Booking Association where she quickly rose to stardom.  By 1923, Smith was recording in New York top hits such as “Down-Hearted Blues,” “Nobody Knows You When You’re Down and Out,” and “The St. Louis Blues” (also the name of a film she appeared in).  Bessie Smith knew very well the heartache she sang of.  Her life, though outwardly glamorous, was marred by alcoholism, infidelity, and the Great Depression.  Smith died in a car accident in 1937 outside of Clarksdale, Mississippi.

In their archive of biographies, PBS described Bessie Smith’s “broad phrasing, fine intonation, blue-note inflections, and wide, expressive range” as solidifying reasons for her being the “greatest of the vaudeville blues singers.”

[/intense_tab][intense_tab title=”Louis Armstrong” active=”” border=”3px solid #e8e8e8″ link_target=”_self” icon_source=”batch” icon_stack_source=”batch” icon_size=”1″ icon_position=”left” icon_spin=””]Many of the other legends of blues and jazz celebrated by this concert can point to the influence of, collaboration with, and even the teaching of Louis Armstrong.  A forerunner of modern music, Armstrong combined the soul of New Orleans with the music culture of Chicago to usher in the era of modern jazz and the popularization of improvisations like scat singing.  Armstrong rose to prominence in the 1920s with his gravelly voice and his bold trumpet playing.  All of this came not without its own setbacks.  Armstrong faced racist reviews, rejection of his cutting-edge style and run-ins with the mob in Chicago.  He continued to innovate, moving from big bands to a six person group as music culture changed in the 40s.

The 50s and 60s saw Armstrong tour all over the world, but when he came home he encountered pressure as the civil rights movement faced setback after setback.  For most of his years he remained silent on the issue, but in 1957 he spoke out against President Eisenhower, boldly proclaiming, “The way they are treating my people in the South, the government can go to hell.”  A decade later he produced a different sort of song and what would be his most famous recording, “What a Wonderful World.”  Even after his death in 1971, Armstrong is no doubt one the most influential artists in all of music.

[/intense_tab][intense_tab title=”Duke Ellington” active=”” border=”3px solid #e8e8e8″ link_target=”_self” icon_source=”batch” icon_stack_source=”batch” icon_size=”1″ icon_position=”left” icon_spin=””]“You’ve got to find some way of saying it without saying it.” (Duke Ellington).  Starting life in Washington, D. C., Duke Ellington was one of the most influential jazz artists and composers of the 20th century.  Ellington grew up in a musical, middle-class family and received his nickname “Duke” for being known as a gentlemen at a young age.  By 17, Ellington was playing professionally in Broadway nightclubs with his band, eventually landing in the New York hotspot, the Cotton Club.  They quickly became a premiere band with many unique sounds such as Bubber Miley, Joe Nanton, Cootie Williams and Johnny Hodges.  They even performed live on radio and had cameos in several films.  Ellington was awarded 12 Grammy awards and sang hit songs such as “It Don’t Mean a Thing (If It Ain’t Got That Swing),” “Sophisticated Lady,” and “Prelude to a Kiss.”  Stevie Wonder’s “Sir Duke” was written and performed as a tribute to Ellington.
[/intense_tab][intense_tab title=”Cabell “Cab” Calloway III ” active=”” border=”3px solid #e8e8e8″ link_target=”_self” icon_source=”batch” icon_stack_source=”batch” icon_size=”1″ icon_position=”left” icon_spin=””]Famous for songs such as “Minnie the Moocher” and “Reefer Man,” as well as being known as an energetic showman, actor and fashion trendsetter, Cab Calloway began simply in a middle-class family of Rochester, New York in 1907.  After leaving law school and meeting Louis Armstrong, Calloway began singing scat-style—an improvised, wordless singing technique.  Soon after, much like Duke Ellington, Calloway began to gig at the Cotton Club in downtown New York, and his career took off.  Cab and his big band grew in popularity and toured across the United States, Canada and Europe, but as smaller groups became more attractive to listeners, he started performing with only a six-member group.  Calloway found other ways to woo his audience, too.  Later in his career he was featured in theatrical productions, cartoons and movies—including The Blues Brothers in 1980.

In 1994, Cab Calloway passed away, but his performances continued throughout his life all the way up until his death.  He is still remembered as one of the greatest showmen of all time.[/intense_tab][intense_tab title=”Billie Holiday” active=”” border=”3px solid #e8e8e8″ link_target=”_self” icon_source=”batch” icon_stack_source=”batch” icon_size=”1″ icon_position=”left” icon_spin=””]Born Elinore Harris and later nicknamed “Lady Day,” Billie Holiday lived a hard and difficult life, cut short from a lost battle against drug abuse.  Her plights began from childhood, growing up with a non-present father (the jazz musician Clarence Holiday), suffering sexual abuse, becoming involved in prostitution at a young age and eventually spending time in jail.  Holiday often turned to music for escape, finding herself in the painful blues of Bessie Smith and smooth romance of Louis Armstrong’s sound.  By age 18, she was performing in Harlem night clubs when she was discovered by a local producer.  As her career exploded, she changed her name to Billie Holiday after movie star Billie Dove and her father’s last name.  From large band and orchestra gigs to solo productions, Holiday produced such incredible hits such as “Riffin’ the Scotch,” “God Bless the Child,” and “Strange Fruit,” a deeply emotional song about the lynching of African Americans in the South.

The end of Holiday’s life continued to suffer from destructive relationships and abuse of alcohol and increasingly hard drugs.  Despite her difficulties, however, Lady Day is still considered one of the most influential and most talented jazz and blues artists ever.

[/intense_tab][intense_tab title=”Ella Fitzgerald” active=”” border=”3px solid #e8e8e8″ link_target=”_self” icon_source=”batch” icon_stack_source=”batch” icon_size=”1″ icon_position=”left” icon_spin=””]Ella Fitzgerald is a true example of the American Dream.  Although she, like many other legends commemorated here, experienced a difficult childhood of split parents, financial struggles and a run-in with a brothel, she eventually went on to be the first ever African American woman to secure a Grammy Award in 1958.  She would go on to win 13 Grammys and sell over 40 million albums.  Unlike her legendary contemporaries Bessie Smith and Billie Holiday, Fitzgerald was not known for focusing her musical artistry on her life’s hardships.  Rather, songs like “Honeysuckle Rose,” “Dream a Little Dream of Me,” and “A Tisket a Tasket” took her to the tops of the charts.  She was also highly collaborative, performing and recording with the likes of Duke Ellington, Louis Armstrong, Count Basie and Frank Sinatra.
[/intense_tab][intense_tab title=”B.B. King” active=”” border=”3px solid #e8e8e8″ link_target=”_self” icon_source=”batch” icon_stack_source=”batch” icon_size=”1″ icon_position=”left” icon_spin=””]Not only is B.B. King one of the best and most famous blues singers of all time, but so is Lucille, the name of his guitar.  King says he named his famous guitar after a club fire in Twist, Arkansas nearly killed him while saving his guitar from the flames.  He later found out that the fire was started by two men fighting over a woman named Lucille, and he wanted a reminder to never do anything as foolish as that again.  King’s unmatched ability in blues guitar, paired with his “bluesy” vocal ability has stirred the country for decades across songs like “The Thrill is Gone” and “Rock Me Baby,” as well as working with Eric Clapton, Buddy Guy, Elton John, Sheryl Crow and John Mayer.

The King of the Blues has continued his artistry for decades, receiving Grammy Awards, the Presidential Medal of Freedom and an induction in the Rock and Roll Hall of Fame.  Today, his gigs are few, but his music is commemorated by the curators of The B.B. King Museum and Delta Interpretive Center in Indianola, Mississippi.

Videos of Blue and Jazz Performances by the Legends

You can help promote this amazing concert by hanging posters and flyers at your workplace or business, promoting it on social media, and inviting your friends and family!

Click on the social media icons below to share this event! Make sure you use the hashtag #GoodTimesVOU when talking about the concert!

Form is successfully submitted. Thank you!

This concert is made possibly by our generous sponsor, Parkview Health. We would also like to thank Sweetwater Sound and Lincoln Financial!

Are you a business, corporation, or individual who would like to underwrite and support this concert (and futures ones)? Click on the button below or contact us.

Your donations (no matter how small) make these concerts possible. Not only that, you are supporting an organization that’s raising up our leaders!

This concert is taking place in beautiful Downtown Fort Wayne at the Arts United Center located next door to the Fort Wayne Museum of Art on Main Street.

“Its acoustics are top-notch, lighting and sound system are state-of-the-art, and there’s not a bad seat in the house. Arts United Center also contains spacious studios for rehearsals and meetings, a complete workshop backstage for set construction, and office space for the Civic Theatre and Youtheatre.

The Arts Plaza resides in front of the striking façade of the Arts United Center, opening up to Main Street. An entryway and grand promenade for public gatherings, festivals and community events, the Arts Plaza is an open door to arts and culture for Northeast Indiana residents and visitors.” –Arts United Website 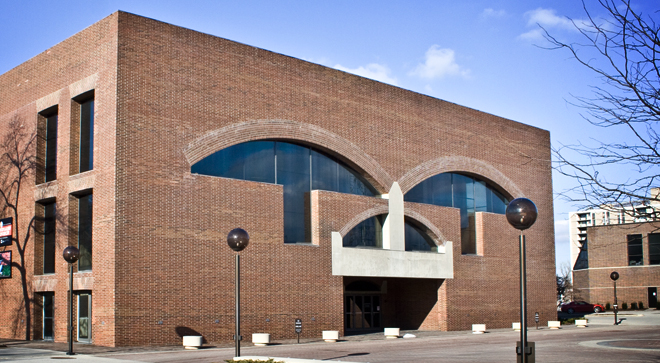