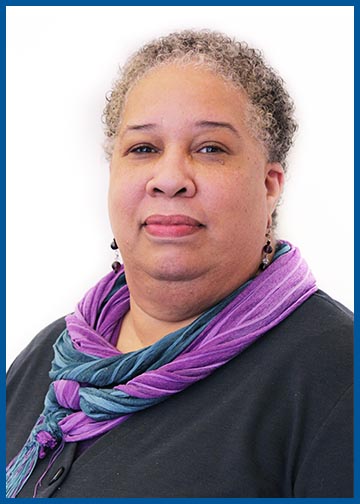 Evelyn J. Frierson was born in Columbus, Ohio.  She has lived in a number of states over the course of her life, but has called Fort Wayne home for the past 20 years.
She became involved with UNITY in 2010 as a volunteer when she learned of the choir traveling to China for the World Choir Games.  Having been a non-profit Executive Director, she understood the importance of volunteerism and wanted to find a worthy organization in which to donate her time, talent and treasure.  Additionally, she has held a number of contract positions with the organization and serves as the Multi-Media Coordinator for the two annual concerts, Praise Celebration and End of Season production.

Evelyn is the founder of FriedJustRight, a media production company that cooks all your media needs to order.  She enjoys writing, photography, graphic design, and most anything related to the arts (both performance and visual).  Her dedication to UNITY and the quality of life that the organization offers young people has been the catalyst for her continued involvement.

Evelyn has one son and one grandson.