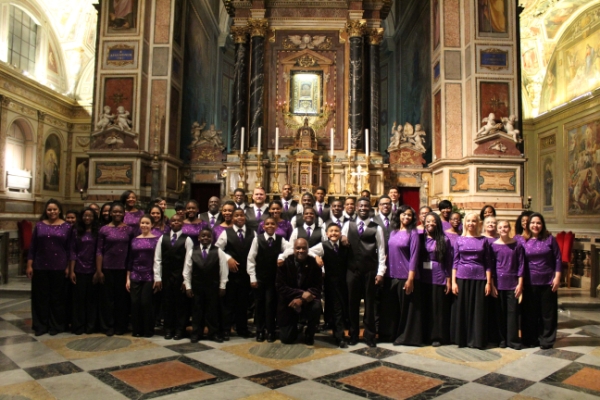 The Voices of Unity Youth Choir’s trip to Europe has been nothing short of spectacular thus far. Through the first week of the two-week trip, the choir has performed several planned and impromptu concerts, seen the sights and sounds of Rome, Venice and the Vatican and seen a Facebook Live video of their performance during a Mass at the Vatican on July 3 go viral. After flying into Rome from Germany, Voices of Unity visited the Sistine Chapel on July 1. That unforgettable experience was followed up with the opening ceremony of the Meeting Music Tour Festival at the Roman Catholic church Basilica di S. Agostino. The infamous Colosseum was the site of more sightseeing on July 2 and included a group of tourists asking for an impromptu concert. The choir obliged with a pair of pieces in the shadow of the iconic venue in the heart of Rome.

July 3 was a huge day, with Voices of Unity provided the musical accompaniment to a Vatican Mass. The performance was recorded on the choir’s Facebook page and as of Friday had received 227,000 views and shared close to 5,000 times. Another impromptu performance was asked for outside of St. Peter’s Basilica soon after the Mass, which was followed by another performance at the All-American Concert at the American Center for Students. Voices of Unity stayed in Rome through July 5 before traveling to Venice. Friday saw the choir in Vienna, Austria before concluding the trip in Budapest, Hungary from today through the 13th.