Review: In This ‘Cruel Intentions,’ High School Schemers Sing the Best of the ’90s

It’s no “Clueless,” but “Cruel Intentions” has endured better than most 1990s teen movies. Partly this has to do with its cast, especially Reese Witherspoon, just as good playing saintly as she would be ruthless in “Election” a couple of months later. But what really made Roger Kumble’s film stand out were the timeless structure and timely embroideries: a fail-safe plot based on the 18th-century novel “Les Liaisons Dangereuses” combined with an arch ’90s sensibility and an inspired soundtrack — the denouement, set to the Verve’s “Bitter Sweet Symphony,” was worthy of Scorsese. 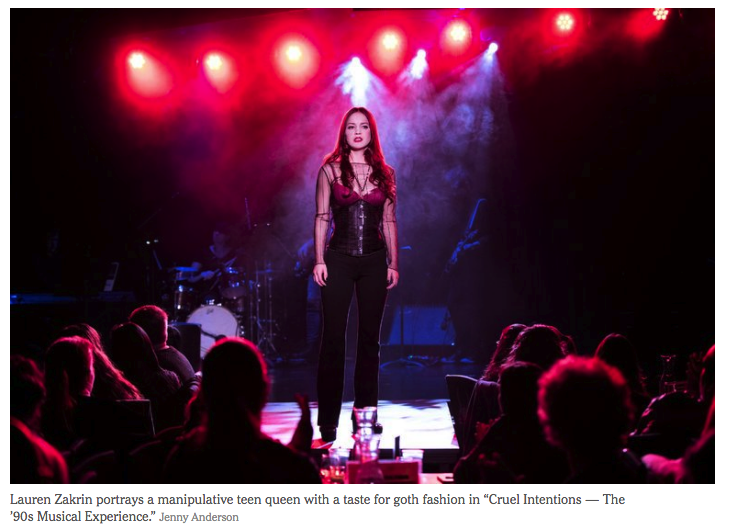 That the film would get the stage treatment isn’t all that surprising, but as its title implies, the nostalgia-fueled “Cruel Intentions: The ’90s Musical Experience” isn’t a traditional tuner, even by jukebox standards.

Adapted by Jordan Ross, Lindsey Rosin (who also directs) and Mr. Kumble, the show is playing at the music venue Le Poisson Rouge. This makes the onstage four-piece band and lack of sets or props look not so much cheap as conceived for the environment, as does the steady stream of songs pulled from both the movie (“Every You Every Me,” “Lovefool,” “Colorblind”) and a “Best of the ’90s” Spotify playlist (“I Want It That Way,” “Genie in a Bottle”).

The ultra-pared-down approach means that details get lost in the scramble, especially regarding the characters’ location at any given time, but over all the storytelling is relatively clear.

Mr. Kumble’s screenplay had transposed the book’s oft-adapted tale of seduction and betrayal to an Upper East Side where spoiled-rotten high schoolers roam free from adult supervision. Kathryn Merteuil (Lauren Zakrin, in full Hot Topic mall-goth regalia) and her stepbrother, Sebastian Valmont (Constantine Rousouli), rule their prep school and engage in decadent games with no regard for the wreckage they leave in their wake. Until, that is, Sebastian falls in love with the virginal do-gooder Annette Hargrove (Carrie St. Louis).

The musical faithfully follows the movie’s plot and includes all the classic lines (“Email is for geeks and pedophiles”) — though not, alas, a breakout performance to match Ms. Witherspoon’s, even if Patricia Richardson (yes, from “Home Improvement”) almost steals the show as a prejudiced parent hammering out “No Scrubs.”

Most of the changes have to do with the music selections. The infamous make-out session between Kathryn and young Cecile (a wonderfully antic Jessie Shelton), for instance, is set to Sixpence None the Richer’s “Kiss Me,” not Blur’s somber “Coffee & TV.”

“Kiss Me” is funny precisely because it’s so obvious, and it emphasizes romance rather than leering exploitation — especially since the scene now also features Sebastian and Annette swooning over each other, as well as a smooch between Blaine and Greg. (That pair, played by Alex Boniello and Brian Muller, actually get more attention than they did onscreen.)

As it is, “Cruel Intentions” could run for a while as a semi-staged rock show, but it does feel like an exploratory tryout crying for a fuller production. After all, if “Rock of Ages” could make a mint from ’80s hair metal, there is no reason “Cruel Intentions” can’t do the same for ’90s pop rock.