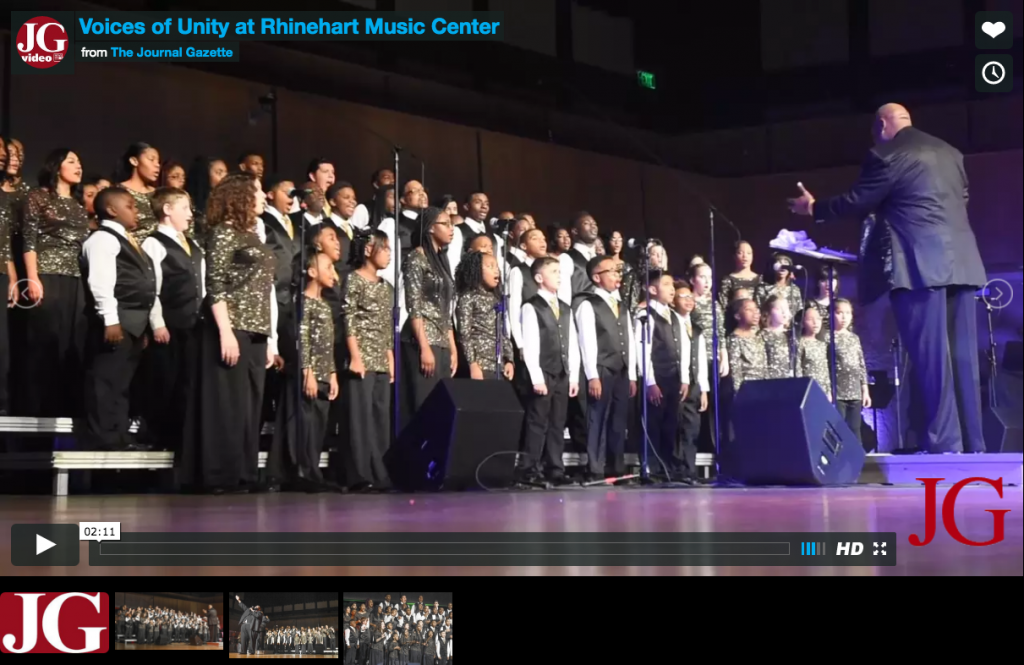 Marshall White, the Voices of Unity Youth Choir director, had some people he wanted the audience to meet before Sunday’s concert, Praise Celebration 2017: Another Breakthrough.

He referenced the news from Chicago about the four African-Americans – three 18-year-olds and a 24-year-old – accused of beating a mentally disabled white man. They promoted hate, evil and cruelty, White said.

He then welcomed four black teens from Fort Wayne onstage of the packed Rhinehart Music Center. Each are members of Voices of Unity, and they shared their college plans, which included aspirations of studying computer engineering at either Purdue University or the University of Notre Dame for one and hopes of attending Princeton for another.

And, through about a dozen songs, they and the other ­Voices of Unity members gave the audience at IPFW a chance to worship through music.

“We want you to feel rejoiced when you leave here tonight,” White said about midway through the concert, which featured such songs as “Holy One,” “I Will Praise Your Name” and “Glory, Glory, Hallelujah.”

Marie Sims, the worship leader at Summit Church, was among nine guest soloists who performed with the choir. Her preparation for the concert began three to four months ago, she said, calling it a “wonderful opportunity” to sing with “such a choir of excellence.”

She said the joy and faith the singers, dancers and band members exude is real.

“What you see on stage is what people are living,” Sims said.

Greater Fort Wayne Inc. CEO Eric Doden, who spoke during the program’s opening remarks, acknowledged that some might wonder what Voices of Unity has to do with economic development.

“How about everything?” he said.

Organizations like ­Voices of Unity teach people the kind of character and discipline that not only make for great artists but also for great employees, Doden said.

The audience heard an example of his influence in soprano Aliviah Cartwright. White recalled how shy she was upon joining Voices of Unity.

“Look at her now,” he said following her solo during “All This Time.”

Between songs, White reflected on the choir’s accomplishments in 2016, including a European tour that took the group to Vatican City, and noted how he – and everyone else in the room – survived whatever the year had brought them.

“There should not be a dry eye in the house tonight,” White said, crediting God, not the choir, for tears shed. “It’s grace and his mercy.”